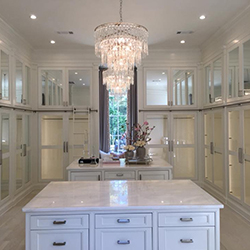 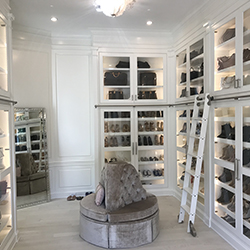 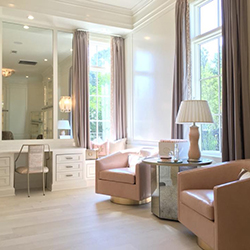 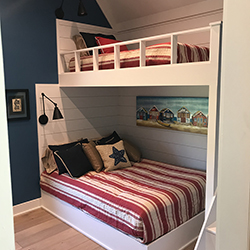 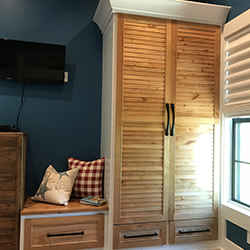 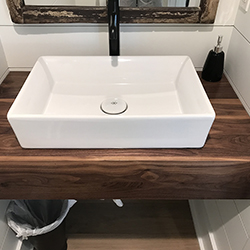 In less than two years, Chuck Davis and Dustin Cooke have managed to turn a two-man woodshop into a rapidly expanding business and appear as regularly featured craftsmen on a successful HGTV series — all without leaving their home town.

“We love doing the Home Town show,” Davis says. “The schedules are crazy, but Ben and Erin and the whole production crew are great to work with. Projects for Home Town accounted for about a third of our business last year.”

Davis & Cooke Custom Cabinetry began with a leap of faith: Davis had worked double duty for a decade, making cabinets for a local contractor while building and selling his own cabinetry on the side. Meanwhile, Cooke had worked in the granite industry as a lead installer/fabricator for seven years. During three of those seven years, he also worked half the year as the pilot of a commercial fishing vessel while building furniture and smaller cabinetry during the off season. The pair had crossed paths professionally, became friends and eventually realized they’d make ideal business partners.

“We still work a lot of long hours, but we’re twice as productive with the software than we would have been without it.”


“We decided it was time to take that chance, so we bought a bunch of used equipment, combined the tools that we had, and found an old building to work in,” Davis says. “We just jumped out there and never looked back.”

The business opened its doors in late 2016 and has since specialized in quality residential projects and customer service. The team has grown from two to five members and, while they attract plenty of business in Laurel and the surrounding areas, they’ve taken on projects in Jackson, Mississippi; Baton Rouge, Louisiana; and parts of southern Alabama.

“Attention to detail and the quality of the final product is what we’re most proud of. We like to have a quick turnaround, but we don’t sacrifice quality for speed,” Cooke says. Once the partners decided to strike out on their own, they knew they would need a manufacturing solution to help them become as efficient as possible. Davis, an experienced drafter, initially used a computer-aided-design (CAD) solution that got the job done, but the process required lengthy investments of time.

After investigating all of their options, Davis and Cooke purchased the Cabinet Vison design-to-manufacturing solution for greater efficiency and ease in handling multiple aspects of their business — from sales and design to cut lists, material management, and more.

“It used to take me one to two days to draw a whole set of cabinets out, but with CABINET VISION I can draw a whole kitchen in a couple of hours and not have to do any adding or subtracting for cut sheets,” Davis says.

The ability to quickly paint a virtual picture of finished projects has also been a boon to the business, as CABINET VISION helps Davis and Cooke communicate job details to customers. Being able to easily make changes when customers realize that the job specifications initially requested do not match their vision is also a significant time saver.

“I was really impressed with CABINET VISION as a selling point for the customer,” Cooke says. “A lot of people still use a drafting table to draw things out by hand, but it’s time consuming to make adjustments when changes need to be made. At the click of a button, we can make those changes without spending a lot of time.”

Realistic renderings also provide a greater level of comfort for customers. “If you’re spending $30,000 on a kitchen, wouldn’t you feel more comfortable being able to actually see what it’s going to look like?” Davis asks.

While CABINET VISION’s 3D renderings were a top selling point for the partners, the system’s ability to handle job details, such as cut lists and material estimates, has enabled them to more accurately calculate profits. “A big point to me was that you can enter in all of the material that you use and it can generate per job how much your material cost will be,” Cooke says. “You can set a standard profit margin for every job, no matter how big or how small. We can set somewhat of a standard across the board for any job that we do.”

Adds Davis, “Within an hour, you have a basic idea of what the customer wants on the screen, and you can just click to get a report that gives you a price for what you’ve just drawn.”

Sixty to 70-hour work weeks have been the norm for Davis and Cooke, who are able to delegate a larger share of their workload because CABINET VISION makes it easier for them to pass important information to the rest of their team. The pair plan to eventually expend their use of CABINET VISION for CNC programming and chose the solution in part because it’s easy to upgrade to higher levels of functionality.

“Slowly, but surely, our guys are progressing in their abilities to the point where they can alleviate some of the headaches that Chuck and I have,” Cooke says. “With CABINET VISION, they don’t have to understand the ‘whys’ of the entire project, just how it all comes together.”

“Being able to take those cut sheets and give them to somebody who isn’t as experienced a craftsman, someone who can cut those parts out and assemble them, makes things a lot easier,” Davis adds. “We still work a lot of long hours, but we’re twice as productive with the software than we would have been without it.”

Davis describes Laurel as an “old timber town,” and notes that the majority of homes renovated on Home Town were built in the 40s, 50s and 60s. Davis and Cooke appreciate the opportunities and exposure the show provides, but also like that they’re able to help improve housing opportunities in their own backyards.

From August to November of 2017, the pair completed projects for six of the 10 houses featured on the show, all of which are purchased and occupied by the home buyers who appear on the series. In one case, Davis and Cooke were tasked with installing three kitchens in one week and, in many cases, projects don’t receive the final stamp of approval until the week they’re installed.

“CABINET VISION just makes it so much quicker and easier to make a quick change because we may not have an approval on a design until Monday and they may need to have those cabinets installed by Friday. The logistics of getting approval are much easier than if I had to draw it myself,” Davis says. “Getting those cut sheets and having hands in the shop cutting them out while Dustin and I are installing is a huge help. We can have that less experienced person building cabinets rather than sweeping floors.”

“We still work a lot of long hours, but we’re twice as productive with the software than we would have been without it.”