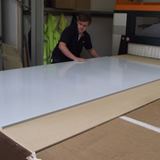 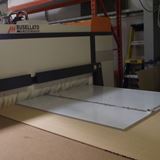 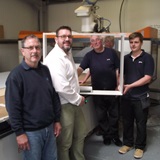 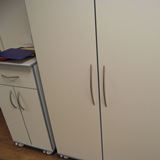 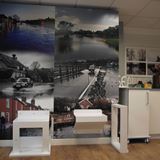 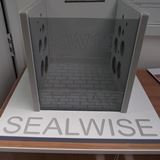 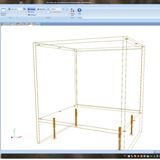 CABINET VISION engineers have set up a customised program to manage an innovative manufacturing process for waterproof and bacteria-proof cabinets produced out of a specially developed unique material.

The idea for the revolutionary Sealwise WCB (Waterproof Construction Material) came to its creator Paul Huggins when he was in hospital.  “On the trip to a wetroom for my first shower after being unable to walk, I discovered there was nowhere to put my clothes while I had a shower. Also, months after leaving hospital I watched TV footage of the floods in Worcestershire and saw dozens of ruined kitchens being thrown away. It all spurred me on to investigate whether material was available anywhere in the world for waterproof carpentry. And there wasn’t.”

“CABINET VISION engineers developed special programs to ignore parts, and create one complete cabinet carcase, with the grooves to allow the folding.”

He was shocked to learn that around 400,000 tonnes of wood particle board were being thrown into UK landfill sites every year. “That’s actually around 560 times higher than the London Shard building – and as a single footprint of 8 x 4 sheet would reach beyond mobile phone satellites in orbit.”

He worked closely with a German company, Simona, to develop a waterproof construction sheet material, which could be used for cabinetry that was also fire retardant and had anti-bacteria properties. At that time he was Managing Director of Wood Wise Trading Ltd, a company which he later developed to be the number one choice for manufacturing Sealwise products. Today he runs both companies, with Wood Wise being based in Somerset; alongside a Regional office of Sealwise. In addition, Sealwise have their head office in Belfast. Whilst Wood Wise are classed as the centre of expertise for working with Sealwise WCB, Sealwise also work with a number of manufacturers and distributors in the UK, along with selling into around a dozen export markets.

Co-extruded from recycled material, Sealwise is a single homogeneous sheet material which is made out of three parts, including a recycled upvc core and pvc surface. The three layers come together in a wet state, which means they then chemically bond together preventing any chance of future delamination. Furthermore, at the end of the product’s lifecycle it can be further recycled into material for injection moulding.

Having used CABINET VISION and its Screen-To-Machine module from Vero Software to design and manufacture the full range of Woodwise products for around ten years, he says the software needed a slight modification to be as equally effective with Sealwise.

“We work with Sealwise sheets of 8 x 4 and 10 x 5, but instead of using cam and dowels on separate sides, top and base, we make cabinets predominantly out of one continuous piece.  The two ends are cut to 45 degrees, and V grooves are routed to fold it. We’ll roll the cabinet over four times, and it clicks together at the end with a final Ovvo joint, all from the one piece of Sealwise. When it clicks together it creates enough pressure so that when W14 solvent is applied for the capillary action to work, it seals all the internal joints completely.” For more details on this see the web site www.sealwise.co.uk.

He says that because the traditional CABINET VISION software is parts led…creating individual parts and then applying joints…CABINET VISION engineers developed special programs to ignore parts, and create one complete cabinet carcase, with the grooves to allow the folding.

Wood Wise invested in a new Busellato CNC router from RW Machines, and with the assistance of their engineers added some additional aggregates for the special grooving and Ovvo joint work. “This final joint is written into the program and sent to the machine by Screen-To-Machine, ensuring the clip is always used in exactly the right place.”

Charlie Huggins, who runs the Wood Wise production operation, says that despite its unique characteristics Sealwise is machined in exactly the same way as MDF and chipboard, and, as well as the patented groove and fold system, it can also be cam and dowelled, screwed and glued. This means that everything they have ever made in wood and board with CABINET VISION, can also be replicated in Sealwise.

“Sealwise costs slightly more than MFC and similar to that of HDF board, so is a quality product, but is getting widely known as being the best at what it does in its sectors.” It has been used to replace a large number of kitchens in flood areas throughout the UK, including around 45 in Cumbria. As well as installed in around 50 NHS hospitals in the UK, Sealwise is being used in the new hospital programme in Kuwait, and the company is handling enquiries from 90 hospitals in China.

A new shadow board, for Hillbrush, is currently in being made for the food industry, and they have recently manufactured a range of kennels for catteries for Technic, which were previously made from stainless steel. After designing the kennels, CABINET VISION’s nester simply looks at a 10 x 5 Sealwise sheet, cuts it out to the correct sizes which then have the grooves cut in, and their machine operators simply take it off the bed, fold it, add the back panel and click the final joint into place, before it is sealed. They also supplied all the kitchens in the Battersea Dogs’ Home refurbishment in 2015.

In addition to being waterproof and fire retardant with a B1 fire rating, Sealwise inhibits bacteria’s reproductive system meaning MRSA and e-coli bacteria, for example, die out extremely quickly. Other benefits: its screw retention is 2.5 times higher than MDF – in tests conducted by Exeter University nearly five tonnes of pressure was required to pull out an M8 screw; and tolerances go down to 0.8 of a mm, matching those of MDF and chipboard. Sealwise has been tested against some other cheaper imports for safe ingredients and where the lead content of the imports was far over the regulatory levels, Sealwise’s lead content was so low that testers struggled to even measure it.

And because of its anti-bacterial and fire retardant USPs, Paul Huggins has built in a special safeguard to instantly show architects, builders and auditors that they have the patented product and not an unauthorised copy. “They have an additive called Verimaster which means if their laser pen is run over Sealwise, it lights up certain molecules, rather like when shops scan £10 notes.” This is an industry first and reassures all those who specify Sealwise that they get Sealwise.

He says before they had the Busellato to manufacture the Sealwise products, they would design their MDF and chipboard cabinets in CABINET VISION and send the programs to their machine using Screen-To-Machine. “Now, all that’s changed regarding the process for Sealwise is that when we’ve designed the cabinets we apply the special over-ride for CABINET VISION to ignore the separate parts, and create the NC code for cutting the sides, top and base as one piece of material, and routing the V grooves for folding it together.”

Business: the centre of expertise for working with Sealwise (Waterproof Construction Material)

“We design our products in CABINET VISION and send the programs directly to the CNC router using Screen-To-Machine.”