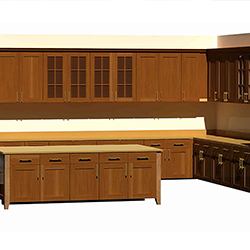 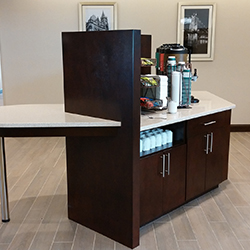 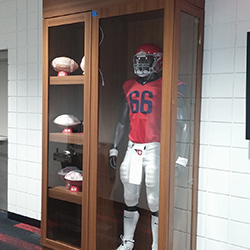 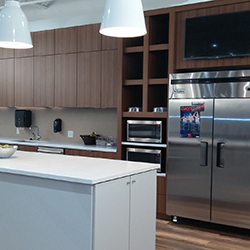 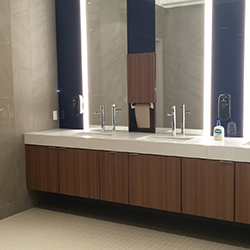 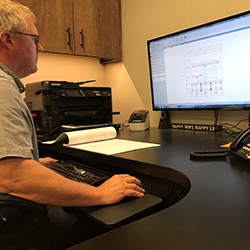 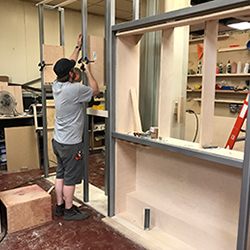 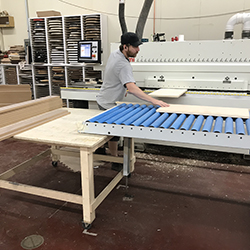 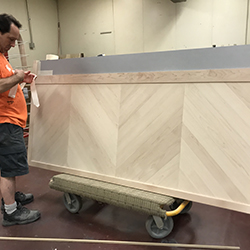 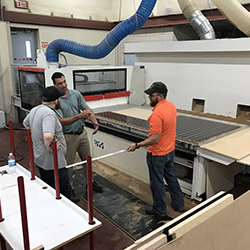 The Woodworking Shop, LLC, began as a hobby and grew to meet increased demand and reduce error with CABINET VISION’s automation and parametric tools

Transforming a hobby into a lucrative business is no easy feat, but quality workmanship and a reputation for excellence turned The Woodworking Shop, LLC, into a bustling enterprise.

Founded by Mark Sams in 2002 as an extension of his woodworking hobby, The Woodworking Shop began to see exponential growth in 2008, when the company was hired to build lockers for a major U.S. supplier. Up to that point, the shop was open just three days a week and used very little equipment to build its projects.

“I said to my wife, ‘Let’s give this a shot for a year and see what happens,’” says Sams, whose wife, Gail, works for a local school district and works as the accountant at the shop part time. “It really was a hobby, and it’s been an evolution that just increased on its own.”

Sams is a man of many hats who, in addition to managing The Woodworking Shop, is a full-time pastor and manages a family-owned retirement community in North Carolina. He also holds a pilot’s license, which simplifies the challenge of doing business in two states.

“We have very few machines, other than hand tools, that aren’t computer driven. That takes the error out of it so that the consistency of the product is better.”


While the Woodworking Shop handles a mixture of commercial and residential work, the vast majority of its projects are sizeable commercial jobs. Most of those jobs are for hotels, large church buildings — those that seat up to 4,000 people — wood lockers and educational institutions. Among its locker jobs are those for Virginia Tech, New York University, and JP Morgan Chase. A recently completed job was the men’s and women’s locker rooms at the University of Dayton’s arena.

“Hospitality is the biggest industry that we work in, and we will probably do ten hotels next year,” says Sams, who does a significant amount of work for the two largest hotel brands in the U.S., the International Hotels Group and Hilton. “We have a reputation, especially in the hotel industry now, where some hotel owners will call and speak with us directly.”

Sams purchased the software before acquiring the router so that he could utilize his new machinery upon arrival. He found that both Vero and SCM delivered strong support during the implementation process, and have continued to provide top-notch service. “In my experience with these two companies, they have come alongside us and walked with us to reach our goals and do the things that we need to do.”

To save time and automate some of its programming processes, The Woodworking Shop uses CABINET VISION’s parametric tool, which enables programmers to cut programming time by reusing existing programs saved to a design library. When the shop has a job that is identical or nearly identical to a former job in every aspect except for size, it can apply the older design to a new job and adjust the dimensions; further tweaks can also be made to the older design as needed. The parametric tool is especially helpful for designs with special details, like geometric cutouts that are purely ornamental, as well as for functional features.

“The parametric capability is a real advantage for us with our locker projects. They can send us different sizes and placements, and I can move a few numbers and parametric puts items where they need to be.”

CABINET VISION’s flexibility and ease of use allow Sams and his crew to easily manipulate, experiment with, and edit cabinets and assemblies during the design process. “You can edit an assembly and actually bend the whole assembly, and the software just redesigns. You can take the bend of a wall with partitions just like cabinets —  with studs instead of cabinets — and bend that, too.”

The Woodworking Shop also uses CABINET VISION automation to implement and enforce company standards, which save time will ensuring quality and consistency in production. User Created Standards (UCS) are a tool that enables users to customize the software to fit the needs and preferences of their shops.

Using a basic “if/then” programming language, UCSs can be written and applied to virtually any process. For Sams, the automation tool saves a lot of time and eliminates handwork for the construction of locker door with two fronts, a sub front and a finished front, that will ultimately be equipped with lock bodies.

“The UCS ability of the software is a big benefit of CABINET VISION. If I didn’t have a UCS for the lock bodies, those would have to be cut with a jigsaw, which would take a lot more time,” Sams says. “If I name that cabinet and put ‘lock’ at the end of the name, it will automatically notch the sub front if there is a lock in that door. All I have to do is change the name of the cabinet and it will put a notch in the door.”

Sams frequently utilizes the CABINET VISION customer forum, where he receives guidance and support from a large and active virtual CABINET VISION community. He writes many of his own UCSs, and also modifies existing standards available on the forum.

“Automation is a big thing for us because our biggest challenge is employees. We have very few machines, other than hand tools, that aren’t computer driven. That takes the error out of it so that the consistency of the product is better.”

For jobs that do not entail casework or assemblies, Sams and his team use ALPHACAM, which is especially suited to cutting complex shapes. One challenging job programmed by the solution was a cone-shaped reception desk smaller at the bottom than at the top.

“We utilize both CABINET VISION and ALPHACAM. Without them, we cannot do the things we do and we cannot be competitive.”

Time is of the essence for any manufacturer, but this may be especially true of Sams, who, in addition to juggling three professions, must find time to spend with his six children and seven grandchildren. For The Woodworking Shop’s 13-member crew, automation ensures both greater efficiency and the kind of quality upon which reputations are made.

“One of our goals as a company is that we want to take care of our employees the best we can, as well as our vendors, customers, and everyone else we deal with,” Sams says. “We take care of them by providing the best products and service that we can.”

“We have very few machines, other than hand tools, that aren’t computer driven. That takes the error out of it so that the consistency of the product is better.”